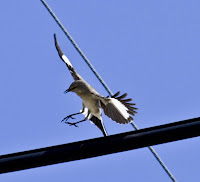 Everybody have you heard?

Yesterday morning, I pulled into my parking space at work, dragging my tired butt out of the car - typical for a Monday morning. As I’m walking towards the door, I notice a bird hovering slightly behind me, over my left shoulder. I was thinking to myself, ‘please don’t poop on me’. The next thing I know, it dive bombs into my head. I immediately recalled the Seinfeld episode where a bird flew into Elaine’s head and she became paranoid that she had a big lollipop head. Of course, I freaked out, hoping it wasn’t trying to peck my eyes out and ran into the building in a fright. Being pooped on, it turns out, was the least of my worries.

I made it inside, set my stuff down, trying to calm down. A few minutes later, my boss came in and I noticed he looked a little disheveled. He stopped in front of my office door and I said, “Did you get attacked by a bird?” He said “Yes” and laughed. I admitted that I too, had been the target of this little creature and wondered if there was a nest nearby.

Our co-worker soon joined the conversation and pointed out that the bush directly in front of my parking space is the home of 3 newly hatched chicks. They are so cute! I managed to get one photo of the nest before I got dive bombed again. I got several great shots of Mama Mockingbird using a 300mm lens. I never appreciated magnification so much until then. 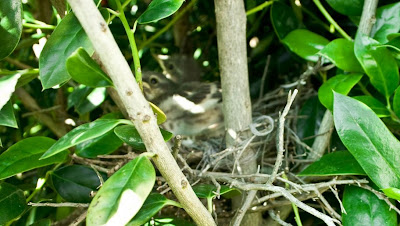 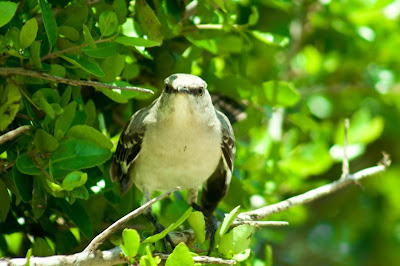 This is the look I got right before the second attack.
From what I’ve read on the internet, it seems that I may need to wear a helmet to work for the next several days.
Posted by Gail Dixon

Great bird photos, they are difficult little critters to get a picture of.