At this moment THIRTY years ago (gasp), my boy entered the world and changed my life forever. We named him after his father, though he's not a "Junior". These days he likes to go by JB.

The first several months were touch-and-go because he was allergic to formula. I tried breast-feeding when he was first born, but that turned out to be a disaster. Apparently, I was too young to know what I was doing, even with the nurse's help. To my mother's relief, I abandoned the idea and went with formula. The idea of breast feeding was not attractive to her. The formula, however, caused major stomach complications. The doctor suggested different types of formula, and even goat's milk was offered at one point. It would just run right out of him; the lining of his stomach completely gone. He was getting weaker and sicker. Finally, he was put in the hospital with an IV drip.
I remember the baseball playoffs were going on because his dad insisted on watching it in the hospital room while I cried and fretted. We eventually found a formula that agreed with him. He healed, growing stronger and more determined with each passing day. 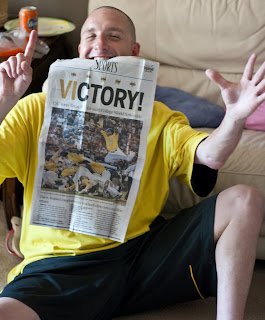 JB turned out to be a sports fanatic just like his dad. The above photo is from his 29th birthday party. My mother had sent him the Baton Rouge Advocate's sports section because LSU had just won the college world series baseball tournament.

To commemorate today's huge milestone birthday, Double D and I told him to pick out tickets to the Rangers vs. Angels baseball game which happens to be playing tonight. He picked some great seats right over the Angel's dugout near third base. I hope to get lots of good pictures. More importantly, I hope to have a marvelous time with my special, sweet, firstborn. :)

At that exact moment, I delivered my third and final child. It seems like just the other day I was 27 and dreading my 30s. Why in the world did I think that was old? And don't you know he feels the same way? Sometimes he thinks so much like me it's a little freaky. 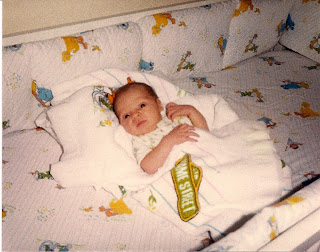 He may be a 27 year old man now, but in my mind he's still my baby boy. And always will be. Forever and ever. Amen.
Posted by Gail Dixon 3 comments: