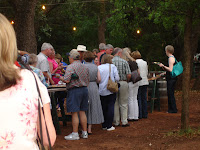 This weekend I played the spouse at my husband’s *cough40thcough* high school reunion. At first, I tried really hard to make nice, seem interested, and overall be a good wife. By the 2nd event, I was wiped out, done, kaput. I am not a highly sociable person by nature anyway, preferring solitary endeavors such as writing, reading, dog petting, and watching TV. Double D is very aware of this and is usually this way himself, but he somehow transformed into a social butterfly overnight.


The dinner on Saturday was supposed to be an outdoor affair under a grove of trees with a live band. I had wanted to arrive fashionably late, but my normally tardy husband was intent on being punctual for all of the events. Somehow, I managed to delay him by 15 minutes for the dinner. We I went straight to the cash bar and ordered drinks. I took one sip of my mini, tequila-lite margarita, when an obnoxious clap of thunder nearly caused a very nasty spill on my fresh clothes. Big drops of rain began pelting us through the thick canopy of leaves. Lightning decided to make an unwanted appearance, so I immediately hauled my hiney into the adjacent restaurant, as did everyone else.


If we had arrived late as I wanted, we could have avoided the horrible hair styles we were left with for the remainder of the evening.

The storm passed quickly, but the musicians had already packed it in since there were more storms coming. The restaurant staff worked furiously to towel off the outdoor tables for us, so we could rush back to shovel in the barbecue chicken, brisket, salad, and hominy before the next storm. I’m still not sure about that hominy. A baked potato would have been more to my liking.

The reunion organizer announced that the band was moving to an indoor facility in town. I asked DD, as graciously as possible, if he could take me back to the hotel with my bad hair, muddy shoes, and soggy clothes and just leave me there. No way was I going to listen to lame music and attempt endless small talk looking like that. He understood, saying how I had been a good sport, yadda, yadda, yadda. I spent the rest of the evening watching The Ugliest Dog Contest on Animal Planet and crying my eyes out while DD was dancing it up with a former cheerleader.


DD was undoubtedly having a grand time. By the 4th event, as he sat eating breakfast, I asked him what was so funny about his eggs. Okay, so I knew he wasn’t finding humor in the eggs, but he looked a little silly chewing with that grin tattooed on his face. He said he was having the best time ever – that this reunion was right up there with our trip to Italy. Um, not sharing that sentiment, but okay. I’m happy that he had such a wonderful experience and reconnected with his classmates, but I never want to participate in something like that ever again.
Posted by Gail Dixon 2 comments:

Email ThisBlogThis!Share to TwitterShare to FacebookShare to Pinterest
Labels: travel

J left me the following message last night and it had me in tears from laughing so hard:

Gail this is J, I’m calling to thank y’all. Um, the flowers y’all sent are very nice. Uh, I had ILLITERATES read the card to me, so I hope I’m saying the right thing. Ya know, somebody named Shanequa can’t pronounce [her Italian last name]. [Shanequa said] “What kind of name is that? I never saw that in my life. There’s 2 a’s in there. Is that your middle name?” I said, “it’s my former SURNAME.” *mmmm….groans* Just complete rudeness!

But I’m calling because your mom said you were concerned about me and I know…when you’re not…when somebody’s sick and you’re far away, it’s hard.

*clipped conversation due to difficulty understanding*

The neurosurgeon just left my room, which I’m not in critical care anymore – I’m in a regular room. And they’ve been walking me and um, have me answer questions. They said, uh, I had to eat more and um, I told them, I said the reason I’m not eating is because when I BUZZ you and TELL you I need to go to the bathroom you don’t come! And you’ve got this damn big ass diaper strapped to my ass and you leave me here for an hour and I said no, I know I’m not going to eat. What goes IN has to come OUT. I said I’m not used to this. I don’t like to go to the bathroom in public. And then last night on each side of me I hear two men and you could tell they were men by the deep baritone in their voice. They were obviously having bowel movements and the nurse said when they were moving me “I hate to tell you honey, this is going to be going all night”. ‘Cause they were on each side of me. They were going “ooohhhh.”

Have mercy! (more laughter) I was laughing so hard. I’m thinking this is why God let women have babies. There wouldn’t be people on the earth…men wouldn’t…they would beg for mercy. You got a bad problem. So men are NOT the stronger sex. Women are not the weaker.
*coughing*

Apparently, my voice mail only allows 3 minute messages because she was cut off during her coughing episode. I called my mother to report the phone call and she said that J is in a private room; there are no men in her room. She's been complaining lately about people talking too loud so they don't disturb Bob in the bed next to her. When the family asks her who he is, she points to the side (at nothing) and says he's underneath the bed trying to get some sleep.

A brain injury can really cause people to do and say some strange things. Like my mother said last night, we just have to laugh because if we don't, we'll cry. And knowing J's sense of humor, she would definitely want us to laugh. Hell, I would want the same if it were me.
Posted by Gail Dixon 1 comment:

Email ThisBlogThis!Share to TwitterShare to FacebookShare to Pinterest
Labels: family

How do people with a terminal or serious illness do it? I have been sick for 5 days and I am seriously ready to perform some drastic action. I have no one but myself to blame since I brazenly took a No-Doz on an empty stomach last Friday. Yeah, I'm stupid. My punishment was three straight days of nausea and vomiting. To add insult to injury, yesterday I began sneezing nonstop. How sneezing crept into this wretched drama is a mystery. I guess it decided that if the other ailments were welcome, then it was, too.

On the 3rd day of sickness - Sunday - I learned that my aunt had emergency surgery for bleeding on the brain. She's in intensive care and somewhat communicative, though confused. 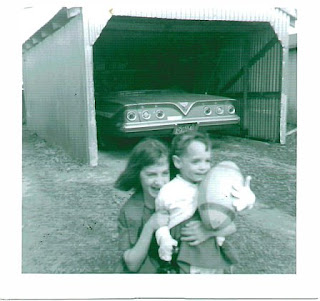 My aunt is only 6 years older than me because my grand-parents were fooling around in their mid-forties using the Rhythm Method. We found the pamphlet after going through my grandparents things when they died. Due to their shenanigans, J entered our lives, and shocked my grandparents back to life.

After raising 4 children through the 1940s and 1950s, here they were, middle-aged and facing the turbulent 60s. As an example, J brought them and me to a head shop on Chimes St. near LSU. They had no idea, but I knew we shouldn't be there because of the t-shirts with boobies painted on them and all the colorful pipes everywhere. By then, my grandparents were too old to argue.

Because we are so close in age, J has been more like a sister than an aunt to me over the years. God knew what He was doing since my real sister died when I was almost 6. J helped me get through that horrible time, like when I would hear a song on the radio that reminded me of the car accident and cry uncontrollably, J would call for my grandmother to come see about me. She definitely looked after me, yet when I annoyed her and her friends, I was told to bug off just like a big sister would.

After we became adults, had our own children and I moved away, we haven't been AS close as I would have liked. Since her 20s, J has been dealing with fibromyalgia, migraines, TMJ and a host of strange health problems. She asserts that my grandparent's genes were old and weak and they passed that on to her. About 15 years ago, fed up with all the pain, she attempted suicide with an overdose. Her husband found her on the bed with several crucifixes placed on her body.

Since that time, she has dealt with an incredibly wayward alcoholic daughter who also dabbled in the occult. This causes her and the rest of the family much heartache. She has another daughter who went through some rebelliousness, but nothing like the other daughter. We've also seen J go through a gambling addiction, several moves, marriage separation, and a bankruptcy.

My life hasn't been perfect, either. The blemishes left scars on me and my family. J never judged me for anything I did - at least not to my face. There were times I complained about her in exasperation because I wanted all the pain and suffering to stop, for her and for me, but I shouldn't have passed judgment. Especially now, seeing years of pain culminate into this horrific event she's going through.

Throughout all of this, J's husband has been there. He has not been perfect by any means, but he’s been there, just as he is now through this brain hemorrhage ordeal.

Today is J's birthday. I wish I could call her up as I had planned to wish her a fabulous day. I hope she recovers from this horrible thing so that I can tell her how much she means to me and that even though our lives didn't turn out the way we had planned, it's our life, it's special and it still has purpose.
Posted by Gail Dixon No comments: