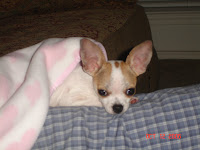 Izzy is incredibly attached to her daddy, so the other day I asked her jokingly, “Where’s yo daddy?”

Based on her explosive reaction, you would have thought I detonated a firecracker under her butt. She started twirling around excitedly, barking vociferously as if to say "Yes, yes, I want my daddy! Where? Where is he?!"

When he failed to materialize, she was beside herself with indignation. Each bark, garbled as it may have sounded to an outsider, had an unusually distinctive sound. I honestly thought she was trying to form words. If a dog bark interpreter existed, it would be verified that she was giving me an ultimatum: EITHER PRODUCE HIM NOW OR DIE.

This pitiful display went on for several minutes. I could have continued on with my fun, but unfortunately she had involved the other three dogs, which could have resulted in ear drum damage. Besides, I don't want the neighbors to think I'm running a dog pound out of the house.
Posted by Gail Dixon