I had such high hopes for G's birthday party. Three weeks earlier, we all had such a great time for M's birthday, and I wanted badly to recreate that. M's party wasn't perfect, but overall I would give it a 4 out of 5 stars. In hindsight, the few hiccups experienced were mild compared to G's 28th birthday celebration on Saturday night.

In preparation, I bought 6 dozen tamales from Dallas Tortilla and Tamale Factory, a case of beer (big mistake), black beans, 2 new lawn chairs, 2 tiki torches, and Rockband. Well, I was going to get Rockband for Christmas anyway, but bought it early for G's party.

Things were going well for a while. M was doing a killer Mick Jagger impression, complete with protruding lips, arched back and jutting hips. My daughter was being her peppy, sweet self. She and her wonderful friend J made a delicious guacamole. G was happy that everyone was there to wish him a happy birthday evidenced by the grin on his face. He did, however, voice disappointment that his dad was late when he was always on time or early for everything else. Besides that, it was all going splendidly in my very small house with 6 dogs and 8 people.

I haven't sorted it all out in my head yet, but by the end of the night the highlights were:
At one point I felt as though I was in the middle of a Jerry Springer episode, or one of those hidden camera shows where the host might jump out and say "You've been punked!" Seriously, I could not believe the level of chaos that evolved over 6 hours and a few beers.

This is the third event in a row that has not gone well and alcohol was involved. Therefore, we will go back to taking the kids out to dinner on their birthdays and no alcohol at family gatherings. I feel like a terrible mother for allowing them to drink in the first place. My mother warned me to not serve alcohol. Why is she ALWAYS right?
Posted by Gail Dixon 3 comments:

Ever since I was a child, I have had night terrors, or what some refer to as sleep paralysis with hallucinations. These episodes cause me such anguish that they stay with me for days.

It begins with a presence in the room, usually a dark figure at the foot of the bed. Sometimes the figure is right beside me or standing over me. It feels like a malevolent spirit holding me down without actually touching me. I am unable to move or make a sound, although I struggle desperately to do so.

Around 4:30 this morning, the familiar being appeared in my bedroom doorway. I tried to scream and although I could hear the sound in my head, I somehow knew that no sound was coming out of my mouth. Sparky moved to the side of the bed closest to the door to block the intruder and I became fearful for Sparky. Then came persistent knocking sounds followed by scratching noises, like someone was taking a chisel to my walls. This caused unimaginable distress since I was literally paralyzed.

Finally, I was able to shake the paralysis and take in my surroundings. My bedroom door was closed and Sparky was sleeping soundly on the other side of the bed. I pulled him close, panting like I had just run a race. All day I will be wondering if a spirit from the other side was trying to tell me something, or if it was an evil being trying to suck out my soul. Lately, I have done some things which I am not really proud of and wonder if God is trying to tell me something. I am very sensitive to these kinds of things.

First thing this morning I started googling and found an interesting article on research that suggests geomagnetic activity could be responsible for sleep paralysis. Excerpt: Recent studies have shown that reports of Sleep Paralysis, and Sleep Paralysis legends are more common in geographical hotspots such as Mexico City and all through-out the Pacific Ring of Fire, even the Hawaiian Islands are crawling with legends of Choking Ghosts. What most of these Sleep Paralysis hot spots have in common is geophysical activity, volcanoes, fault lines and the like. Evidence is becoming more and more convincing that Sleep Paralysis and some other paranormal activity seems to coincide with the geophysical conditions of an area.
Well, we don't have any "hot spots" in Texas that I'm aware of, which leads me to think that the Wikipedia version might be a logical explanation: Physiologically, it is closely related to the paralysis that occurs as a natural part of REM (rapid eye movement) sleep, which is known as REM atonia. Sleep paralysis occurs when the brain awakes from a REM state, but the bodily paralysis persists. This leaves the person fully conscious, but unable to move. In addition, the state may be accompanied by terrifying hallucinations (hypnopompic or hypnagogic) and an acute sense of danger. Sleep paralysis is particularly frightening to the individual due to the vividness of such hallucinations. The hallucinatory element to sleep paralysis makes it even more likely that someone will interpret the experience as a dream, since completely fanciful, or dream-like, objects may appear in the room alongside one's normal vision. Some scientists have proposed this condition as a theory for alien abductions and ghostly encounters.
I'd be interested in hearing other's thoughts and/or experiences. It really is quite terrifying.
Posted by Gail Dixon 2 comments:

Email ThisBlogThis!Share to TwitterShare to FacebookShare to Pinterest
Labels: weird 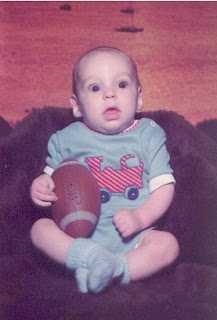 The new blogger feature of being able to post in the future is coming in very handy since I may not be at the computer at 9:47AM to announce this very important event.

I Am No Mrs. Rogers 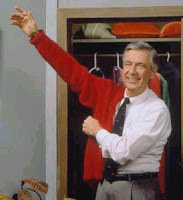 We are not on friendly terms with the neighbors on each side of us, which is not totally our fault. Let me give you a little history.

We share part of our fence with one of the neighbors, so two years ago when it was time to replace it, we told the fence guy that we wanted the pickets placed on the other side of the posts. Instead of the posts being outside, we wanted them inside our yard. On the day of installation, when the neighbors realized that the pickets were going to be on their side, they threw a hissy fit, claiming they would be losing 3" of yard. My guy called me at work and said the neighbors are acting like jerks and that they refused permission to nail the slats from their side unless we put them the other way. We ended up putting the slats on our side just to keep the peace. They have not spoken to us since. Now, WE paid for a brand new fence which helped the majority of HIS property since it ran along the entire side of HIS house, we gave him HIS way, and now he's mad at US. Go figure.

The neighbors on the other side caused a dangerous problem when they started using our side yard as an ashtray. Seriously, they would flick their cigarettes over the fence into our yard, sometimes in dry grass. Who does this?! Well, you can imagine how worried we were that there would be a fire someday. (Actually, we did have to knock on their door once to tell them their trash can was on fire, so you can see how we viewed them as careless, as well as inconsiderate). This cigarette flicking went on for a couple of months when we finally had enough. DD marched over as they were sitting outside and told them to put their butts out elsewhere, using a very harsh tone. That was 10 years ago and we have not seen a cigarette butt since. That was also the end of any friendly relations.

Back to the present.

Yesterday, I was sitting on the back patio, waiting for the dogs to finish their business when the neighbor kids started riding their bikes up and down our driveway. No big deal, right? Our driveway is one of the longer ones and I thought riding bikes on it was pretty harmless. The dogs were barking nonstop, taking longer to do their thing, but I was still cool with it.

Next thing I knew I heard one little boy say, "Hey, watch this!" They pedaled really fast up the drive and then slammed on the brakes, creating a skid sound. It took a couple of times before I figured out what they were doing. I threw open the back gate and they flew off in different directions. The little brats left skid marks all over my driveway.

Well, I was beyond pissed. I was determined to find those rascals. After huffing and puffing, going back and forth, I finally found one of them:

Me: Are you the one leaving skid marks on my driveway?

Boy: It was my friend. (surprise!)

Me: Well, do you know it is not very nice to leave black marks on people's driveways?

Me: I don't EVER want to see you on my driveway AGAIN. Do you understand me?

After I calmed down, I thought, you stupid woman! Now they're going to find it a challenge to see what they can get away with around the house. I'm going to drive up from work one day and find graffiti painted all over my fence, or worse. Oh, what have I done? I never thought I would turn into a raging neighborhood witch.

Was there a better way to handle the situation? Should I have been cool with them leaving black marks all over my driveway? Was I justified in tracking the boys down?

I must add that when I left the house this morning, it looked like someone had tried to scrub the skid marks off because they were very faint. I hope that's a good sign.
Posted by Gail Dixon 3 comments: