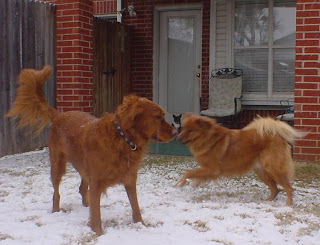 Spenser's passing was much more difficult than I imagined, but it hit Chance the hardest.

The first night without Spenser, Chance slept on Double D's bed. All night. As some of you know, Chance never, ever, gets on furniture. We've never scolded him for it, but for some odd reason, he's always seemed frightened of it.

The next night, Callie came over to play. This made Chance happy, and was a welcome distraction.

Last night, the third night, Chance became confused on where to sleep. He kind of stayed out in the hallway, in between the bedrooms, with a lost look on his face. I know he was asking "What happened to my buddy? Where is he?" I coaxed him into my room and he jumped on the bed, but I could tell he wasn't comfortable there, so he jumped down and went to Double D's room. He wouldn't get on the bed there either, but kept poking his head out the door as though hoping to see Spenser.

Chance always took his cues from Spenser. Wherever Spenser went, Chance followed. He would not even poop until Spenser pooped. Would not eat until Spenser ate. Would not lie down to sleep until Spenser did. You get the idea. They were like peas and carrots. Like Bert & Ernie. Like Cheech and Chong without the pot.

Chance has doe eyes like Bambi. If you look into them for very long, they will melt your soul. His eyes have the capacity to soften the hardest heart. Sometimes I feel he is soul searching me. Dogs can do that, I think. He's also the mildest mannered dog you'd ever want to meet. His sweet disposition coupled with the inability to communicate what's happened, make this a somewhat difficult ordeal.
It's hard to watch Chance these days without his sidekick. I'm sure he'll adjust, eventually. In the meantime, I'll just take a little stroll down memory lane. 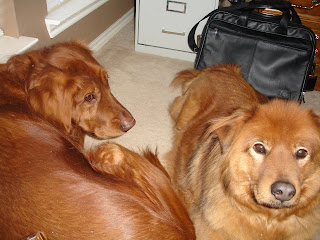 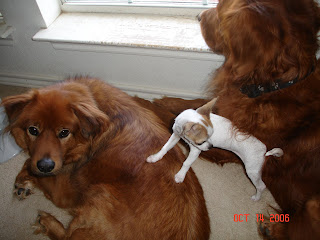 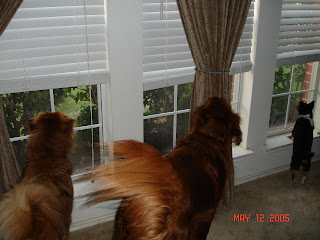 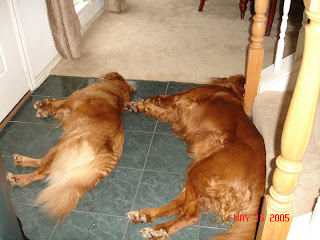 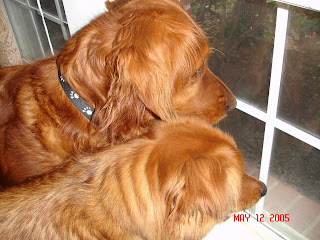 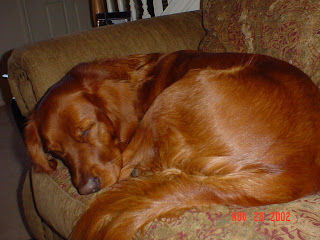 Email ThisBlogThis!Share to TwitterShare to FacebookShare to Pinterest
Labels: death

Oh my gosh - they are so cute together!!! Yeah - it's always hard on the dogs left behind. Especially when they are close. It's hard to watch.

I know Turbo will go through the same thing when it's Tessa's time. He depends on her.