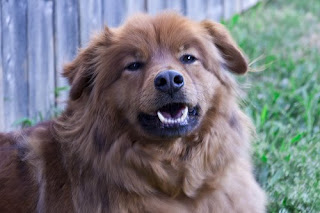 Seven years ago today, I adopted Chance from a pet rescue organization in Lewisville, TX. He was one year old at the time; a scrawny, timid, worm-infested mess of a dog. They said he was part Finnish Spitz and part Golden Retriever. I had never heard of a Finnish Spitz, but I figured I'd study the breed and learn. I think he also has some Chow because his tongue has black markings on it.

Chance spent most of the first year of his life roaming the streets with another wild dog, who, it turns out, was not adoptable. But Chance (Rudy then) had something special that the rescuers felt would make him a good companion animal. And they were right. I'm so glad they took the time to get to know him because he is the sweetest dog I've ever had.

When I first brought him home, he had no manners. In fact, the first day in our house, he stood up to our kitchen counter and nabbed the sandwich Double D had just made for himself. Knowing this was probably a carryover from his life on the streets, we gave a gentle correction right away, and he never did it again. Same for potty training: he lifted his leg on our exercise bike (I felt the same way anyway about that machine), and after only one correction, he was trained.

Double D says Chance is co-dependent, but he actually has sheparding qualities. If one of us is upstairs and one is downstairs, he will get somewhere in the middle so he can keep watch. If one of the other dogs leaves the house, he whimpers, whines, and mopes until they return. He's also the house informant, keeping diligent watch at our window for any possible intruders. If a stranger is nearby, he alerts the rest of the pack with a high pitched bark, then an enthusiastic bite to get their attention. I guess he doesn't feel the bark is adequate enough.

I used to think that animals at rescue organizations were troubled mutts. This experience changed my views completely, and oh how glad I am to be wrong. I have rescued 3 dogs since Chance and they are ALL wonderful, life-enriching companions. Please adopt and give a shelter animal a chance!

Email ThisBlogThis!Share to TwitterShare to FacebookShare to Pinterest
Labels: events

Yes, that is indeed Izzy's bark. We think it's because her lungs are so small. At least that's what we read somewhere.