Since my last post was called Geek Out, it seemed only fitting to title this one Freak Out. Let me 'splain.

Hubby took me out to Cypress Island for my birthday on Monday with the hopes that I'd get some photos of the roseate spoonbills and finally shut up about it. Unfortunately, they were too deep into the swamp, so my shots were mediocre. He has promised to take me back again soon. What a good man.

This anhinga, aka water turkey, was quite a sight! He was the first thing I saw as we entered the Island. He was drying his wings, posing beautifully for me. 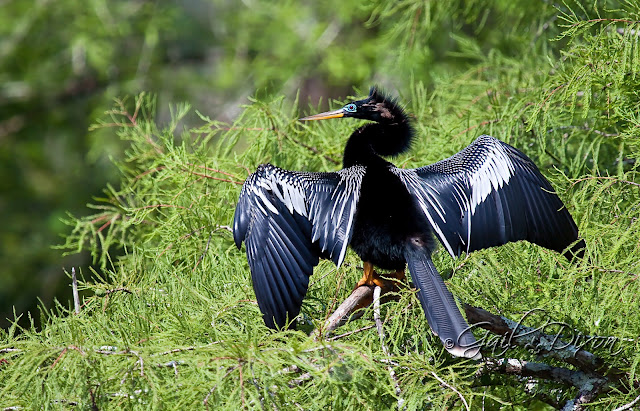 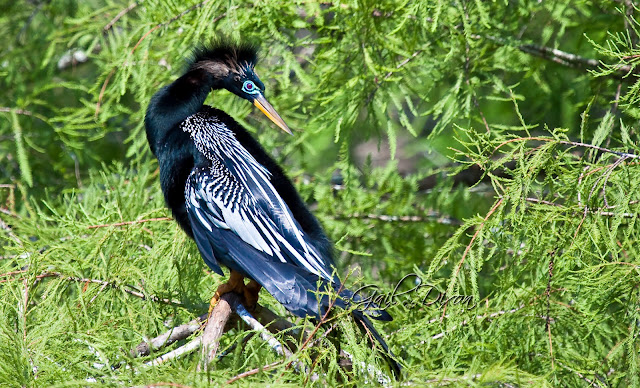 As we drove along the water, a few other folks were out and about, pointing to certain things they'd see in the water or by the banks. We pulled over for the first "pointing" and it was a 10' alligator!

I watch Swamp People and I know how fast these suckers are, but for some reason, armed with my camera and tripod, I felt invincible. My desire for a good shot apparently overrides my common sense.

We saw three gators sunning at various locations beside the bank and three swimming in the waters. I crept up to one that was sunning and stood 15' away, snapping one shot after another. He was so still that at one point I wondered if he was dead. Then he raised his back leg AND I BOLTED! It was such a thrill. The exhilaration was like a high. Looking back, I just can't believe I'd be that daring. It's so not my personality. 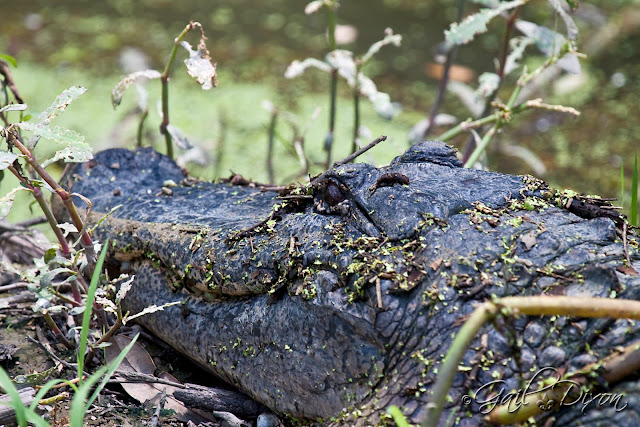 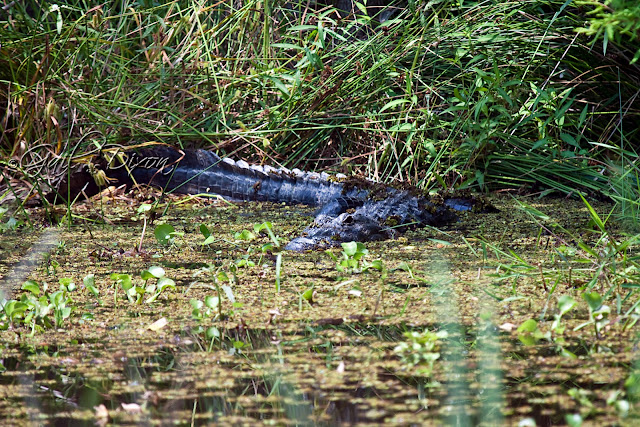 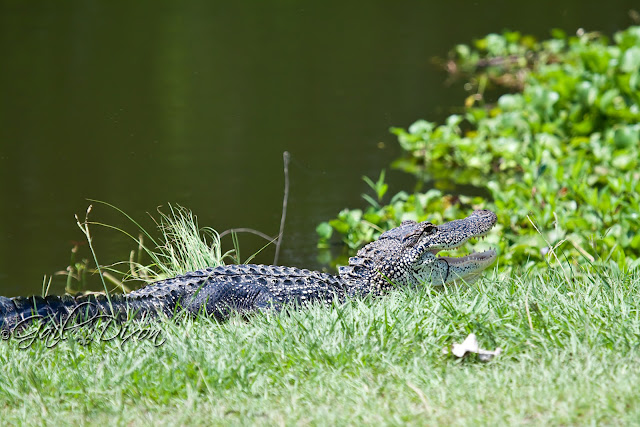 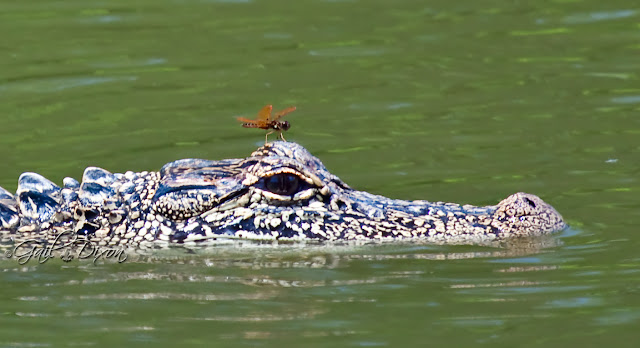 The little blue herons put on quite a show. It took me a while to figure out that they weren't fighting. You see, I had forgotten that the babies are white with green legs. Little blue babies are vocal, demanding little suckers. This babe latched on to her mom's beak and tugged and yanked until she got what she wanted while her baby brother cried, "Hey! What about me?!" No wonder he was so much smaller. :/ 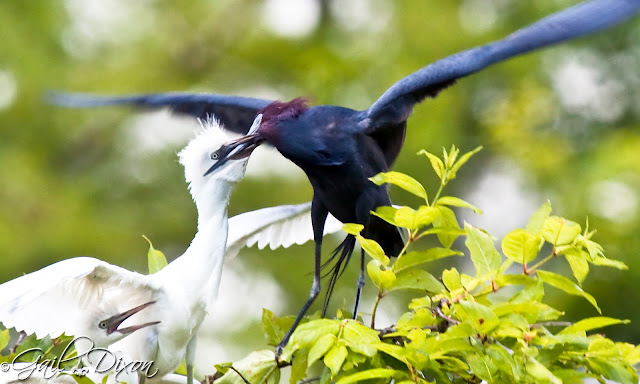 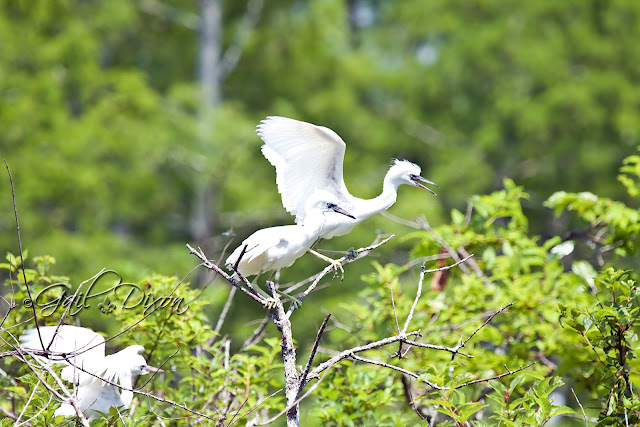 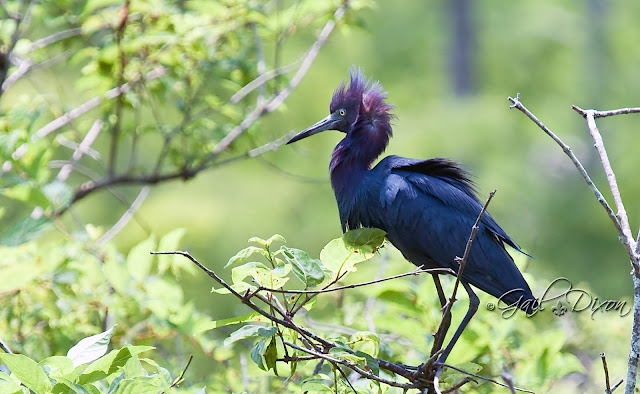 The cattle egrets were as far away as the spoonbills. I watched as the babies practically inhaled mom's beak. I couldn't believe how far her beak could go down her babes' throats without hurting them. 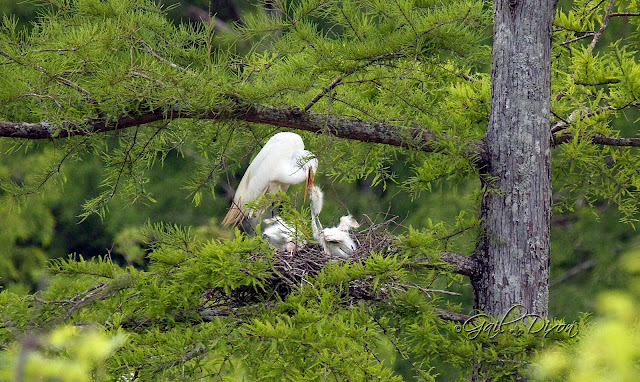 Alas, my only halfway decent shot of the roseate spoonbill. 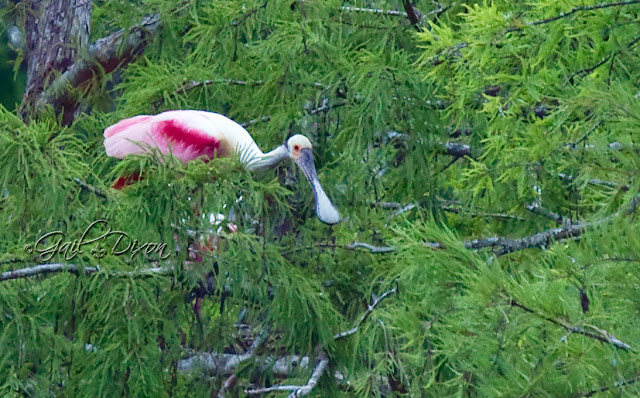 So, that's how I celebrated my birthday. For Mother's Day I went to New Orleans. It's just as weird and wonderful as I remember. All three of my kids called me which was really the highlight of my day. They also each sent me something very special, things they know I would treasure. I love and miss them so much!

Before signing off I want to thank Hilary of The Smitten Image for choosing my Geek Out post for the Phine Photography section. Hilary has an amazing blog and great sense of humor with a wonderful writing style. Please visit her and all the other recipients if you have a chance! Thanks again, Hilary!! 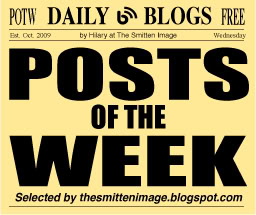 i had seen you selected as a POTW! :)

these are great shots, but puh-leeze stay further away from those gators! yikes!

love the 'water turkey'! such a beauty!

Pretty daring, getting so close to that gator. But not as brave as that little dragonfly! :)
Love the shots of those grabby little babies.

I have NEVER heard of a water turkey!! Actually, I have never seen a rosette spoonbill either!!
And seriously?!! You got within 15 feet of gators?!! (great shots, btw!!) I will have to show my boys these shots tomorrow!

Brilliant photos Gail. You were rather game getting so close to the 'gator.....pleased you had a safe escape.

Tell me you had a really long lens to take the pic of the bug on top of the gator's head! I've never even heard of a water turkey (and I don't live all that far from you!) but it's a gorgeous bird.

Lol -- the camera becomes like a shield against all sorts of bad stuff -- doesn't it?

Your bird shots are nothing short of amazing, Gail. Awesome!

Another gorgeous set of photos, Gail. I love the dragonfly on the gator's head. I don't like that you got that close though.. tsk tsk! :)

Thanks for your kind words and linkage. Very much appreciated. :)

Wow wow wow! Your shots are just amazing. What a fabulous part of the world you've moved to.

Love the shot of the gator with the bird on its head... You were very brave getting so close to them.

And congrats on your POTW.

you live in an exotic bird sanctuary and you're not telling us, right :)

but OH GOD....that alligator. you were WAY brave...but i do know how a camera in my hands does the same thing to me....especially when i'm trespassing :)

Your photos are amazing. I was hyperventilating just looking at these shots.. Very daring my friend.

I know I've said this before, but I can't get over all the animal photos that you take. Wow! These all look great. I really love the one of the alligator with the dragonfly on its head. You're one brave girl :)

I've never heard of a water turkey Gail. What a gorgeous bird! You are much braver than I would have been with the gators. I'm not sure I would have gotten out of the car!

Although a bit late, Happy Birthday to you my friend!
xo.

Oh, I can't believe you got that close to a gator, you brave crazy woman! But GREAT SHOT! Love all the rest - didn't know the blue heron babies were white!! Happy belated Mother's Day!!! Glad you had a good one!

Girl, you were TOO CLOSE for my comfort. I was on edge just reading about it!

I love the dragonfly on that gators head. Excellent shot. Still...no photo is worth the risk of being breakfast!!! :)

Some beautiful captures of some of my favorite birds! I couldn't think of a better way of spending a birthday than doing what you did!