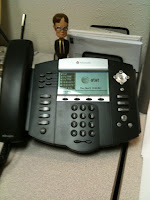 If you've read this blog for any length of time, you all know that I love technology. I embrace it even. I think my gadget-buying spree back in the spring proves that. The Polycom SoundPoint IP 650, however, is my first technological nemesis. From what I can gather online, this is supposed to be the latest, greatest thing to hit small businesses since computers, probably. After giving it my all the last 2 weeks, I've come to the conclusion that it's a complicated piece of crap. Either that, or Apple's intuitive interface for the iPhone, iPod Touch, and iMac has spoiled me rotten.
When a call came in on the old phone for my boss, all I had to do was press the HOLD button, intercom him and say something like, "It's Bob Vance from Vance Refrigeration on line 1." If he wanted to take the call, he'd thank me and press the blinking button. If he didn't want it, I would take a message. Yeah, the message taking part was a pain, so I was really looking forward to the promise of the PSPIP 650 because it was sold as the ability of transferring those pesky calls straight to voice mail.
Sounds simple enough, right? So NOT simple. When a call comes in and I hit the TRANSFER key a recording comes on and tells me I am unauthorized to do so. If I put the caller on hold, it will not show as a blinking line on my boss' phone. Some of the phones in our office can intercom hands-free, others cannot. Mine is in the no intercom category, naturally. There is also no way to tell if my boss is busy on another line. Just basic stuff you need to know or be able to do for simple phone routing. This system is anything but simple.
Today I had the solicitor from Let Me Pester the Hell Out of You Corp. who would not give up trying to get through to my boss. Because I couldn't transfer her, I had to physically walk into his office and tell him who was on the phone. His response? "Not interested." So I told her he was busy. She asked for voice mail. I gave the TRANSFER key a try. It didn't work so I decided to just hang up on her. With most solicitors this is a very effective tactic. She called back.
The phone does have one awesome thing that our other phone didn't have: caller ID. So when she called back the screen gave me the following options: ANSWER • REJECT • IGNORE. I chose REJECT. In theory, a rejected call is supposed to go straight to voice mail. Not my phone, oh no. It rang to another phone outside my office. I ran to that phone and hit IGNORE. I returned to my desk and she rang again. This went on two more times. I thought, 'well, at least I'm getting a little aerobics in'. There was quiet for about 5 minutes and I thought I had finally gotten the best of her.
Well, Bertha from Let Me Pester the Hell Out of You Corp. was having none of this runaround, so she called back, only my screen displayed "Anonymous". I answered the phone all cheerful, suspecting it might be her, and Bertha informs me, rather nicely, that she has been hung up on three times and she needs to talk to Mr. W. I explained that we had a new phone system and I'm very sorry but it appears our voice mail transfer is not working so I will have to take a message. This woman wasted all my time (and hers) to let my boss know about an upcoming Builders and Contractors Expo going on in our area. I felt like shoving my handset down her throat. And I am not a violent person.
Posted by Gail Dixon

Oh, Belle, wish I had your technical knowledge -- most of it's Greek to me, but keep slugging away at it -- going to give your blog a really intense read again for pointers!!!

I don't think I have any pointers on here. I barely get by in the technological world myself. But thanks for reading my rants. :)