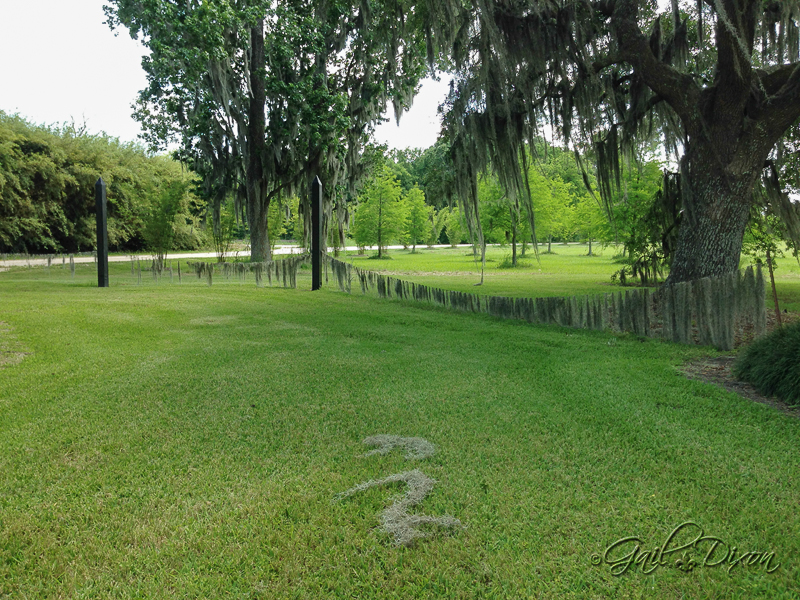 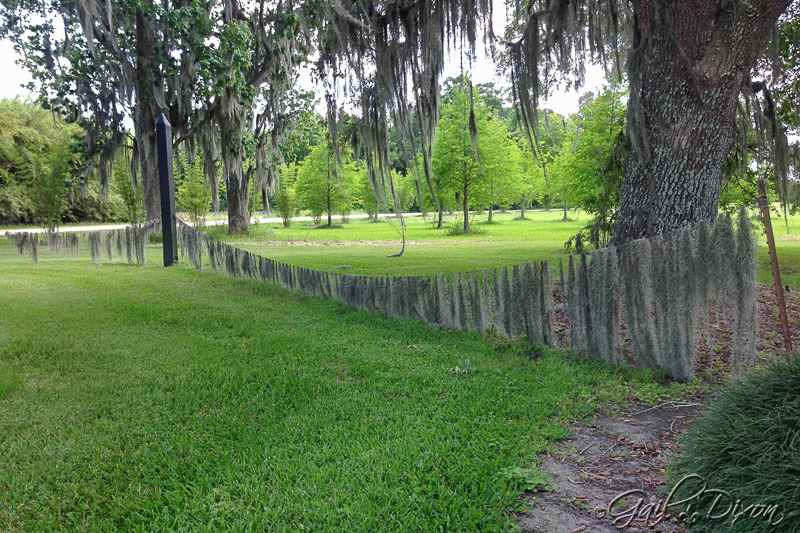 Thank you for hosting! Please visit other fences from around the world.
Posted by Gail Dixon

Poor owlets; I hope Barbara and Barry have better luck in the future.

I love the effect of that moss on the fence! It's beautiful. And I love that owl Gail!!

The moss...one of my favorite things in LA. It's so beautiful. Great 'fencing'.

Too bad/sad about the owlets tho. Yep, again next year.

That's a great moss fence. I love seeing the moss in the trees. I'm glad Mom and Pop owls are okay.

That's a great moss fence. I love seeing the moss in the trees. I'm glad Mom and Pop owls are okay.

I think Barbara must be sitting on a Cypress tree branch. That Egret is stunning!

condolences out to Barb and Barry

All nice pics -- even the iPhone moss.

The moss fence is neat! Also, you great white egret photo is stunning!

Your spanish moss fence IS interesting!! It wouldn't have fallen so perfectly!! someone saving it to sell?? Once it hits the ground it's inundated with chiggers, red bugs and other little 6-legged, biting critters!!
LOVELY picture of Barbara cleaning herself with new cypress coming out!!

Sometimes I can't believe how wonderful is nature and the birds. It's really amazing! I loved the white bird :D

Yes, you wonder if someone did the "fence" like that on purpose?

Nice catch with the barred owl. We enjoy watching owls and birds of prey when we get a chance on our hikes. Mostly though, our loud little gang of hikers scares them into hiding.

I love the Spanish moss on the wire fence. Glad to know Barbara and Barry are okay.

I love the moss draped over the wire! Your bird photos are gorgeous. That egret is superb!

Grandma Barb's This and That said...

Wonderful photo of the moss on the fence! I've never seen anything like it. Love your bird photos too. Especially the one of Barbara. ;0)
Barb

sorry about the owlets!

loved the moss-draped fence! rather reminded me of the beads along the fence in nola! :)

Such great shots my friend. Poor Owls. I do hope there little ones are in hiding somewhere.

I do hope you enjoy your weekend..
I always look forward to seeing your photo.

Love the fence in the first 2 shots against the very green area. Pity about the Owls this year but there will be another year, Love the birds shots.

I always enjoy your photos and that moss always entrances me. Lovely!!

It looks like someone is hanging the moss out to dry. That egret photo is just stunning.

ohmygoodness! the egret is amazing...

I would LOVE to see a snowy egret someday! Meanwhile, I'll be happy to see your photos of this amazing bird. As for the moss, I wonder if the person caring for the grass had a partner who hung the moss?? :-)

I love that moss decorated fence as well as the bird pictures.

That is a unique fence with all that hanging moss. I find it fascinating. Cool shot of the Egret and that Owl, I also think Owls are fabulous looking birds.

The moss fence is great, and such a clever take on this theme. Great shot Gail as are all the rest of those beautiful birds. The egret in its breeding plumage is magical!

Love all your "moss" shots! And that the female owl is named Barbara. My daughter often accuses me of looking like an owl. I think it's the big nose and glasses.

I love the pretty Mossy fence. Beautiful egret shot and I love the Owl. So sorry to hear the owlets did not make it. :(

LOVE that Egret! Wow, what a sight to capture. I also love that moss fence.

i wonder how long it would take the fence to have that moss? i know it grow quickly. wonder how quick? ( :

Oh Gail! Seriously you have a dress like mine? You GO GIRL!!!

Thanks for your ever appreciative words each time you visit. I so enjoy you!!!

Those iphone photos are amazing. Are you on Instagram? You should be. Try it, you'll like it!

oh Gail, that is such an interesting fence, I have never seen anything like it!!

So sad about those little owlets, but I guess it's just part of life's circle!!

The egret is stunning, so much detail. A really special image, I'm so happy to be following you!!

That looks like a moss clothesline! haha! The egret and owl are beautiful!

Now that is one unique fence. Thanks for sharing the amazing photograph.

Your 'moss fence' is a most interesting one. All the bird photos are beautiful.

That mossy fence is lovely as is the white tutu of the egret!

The moss fence is beautiful! Hope the owls have a successful nest next time.

Oh so sorry for the owl family, the moss, especially the egret and the owl photos are my favorite, and what a capture with the egret!

Wow; you featured moss for this post♬♬♬
Great series of pictures; I remember I was SO surprised with the egret with that fine feather from your gorgeous picture♡♡♡ Hope the successful next time for the barred owl pair!!!

So sorry for my a bit late comment, I was a little busy but catching up♪♪♪

Sending you Lots of Love and Hugs from Japan, xoxo Miyako*

Love the moss and birds and especially glad to hear the owls are still ok.

Love the moss and birds and especially glad to hear the owls are still ok.

That is such a cool fence! I love the moss. The bird images are spectacular, especially the owl!

I have run out of words...your photos render me speechless. To see an owl like that...wow!

and i really love the bird portraits. spectacular!

Sad about the babies