Very seldom do I have the chance to photograph the tricolored heron. Did you know this bird used to be called the Louisiana Heron? Double D spotted this one with his binoculars at LSU Lakes on December 1. This industrious bird had found his fortune at the pond in the middle of the golf course.

Dodging golf balls, I let nothing deter me. At one point we stood in between two live oak trees to avoid getting hit in the head. The golfers were very gracious; however, I think I may have let my disdain for them show by sighing and making grumpy faces. As we left I noticed a big sign that said "GOLFERS ONLY ALLOWED ON GOLF COURSE." I felt like an entitled arse with my high powered camera. Bad Gail! Don't judge, you would've done the same! lol

Because my little subject was so unafraid, and didn't seem to mind a nutty camera woman recording his every move, over 400 images of just him ended up on my memory card. He caught so many fish I lost count. 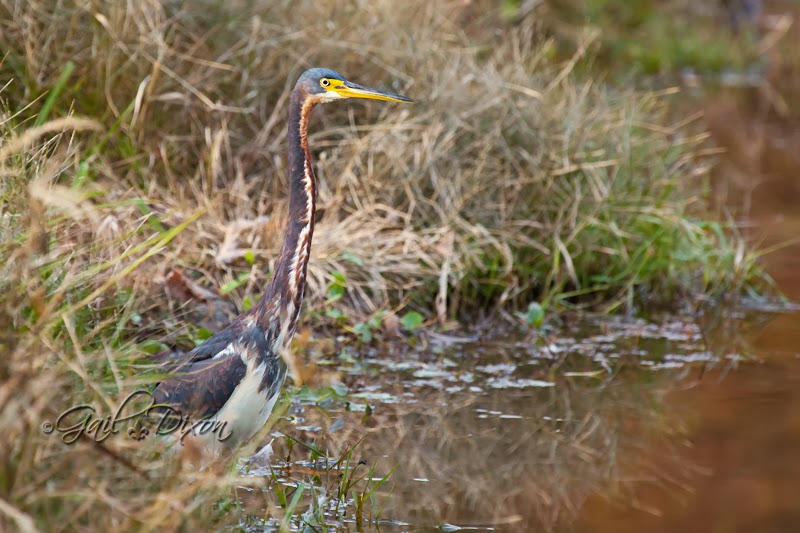 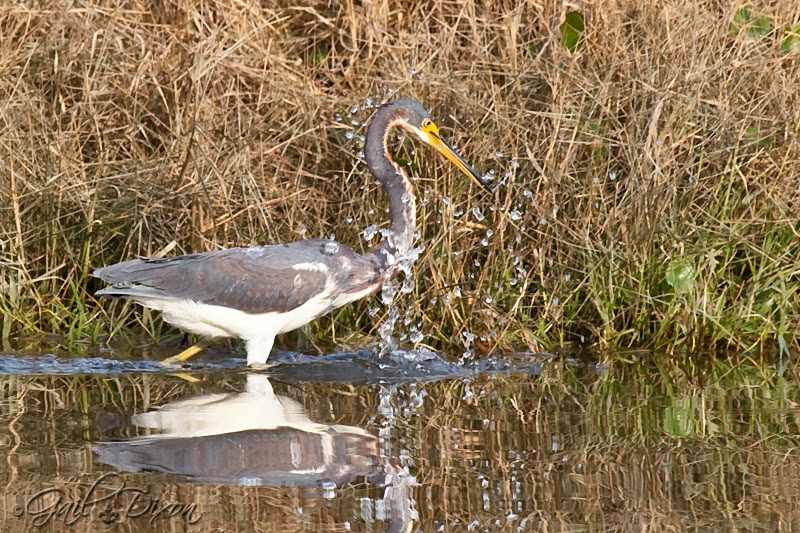 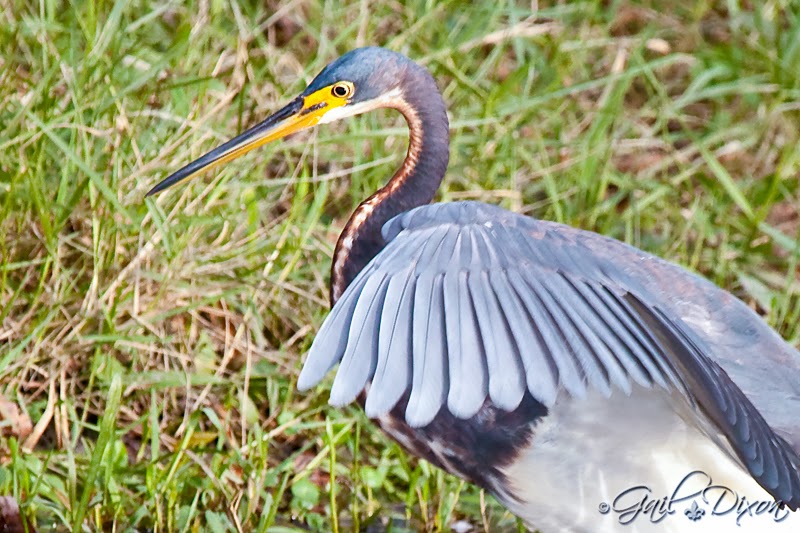 At first we thought this heron wasn't quite right in the head. He twirled around in the water and performed like a ballerina at times. But each time he came up with a fish, minnow or other prey. Double D and I were laughing at him, yet we had to admit that his tactics were successful. Turns out, this is exactly how they hunt for prey. We really should have videoed him; he was a hoot! 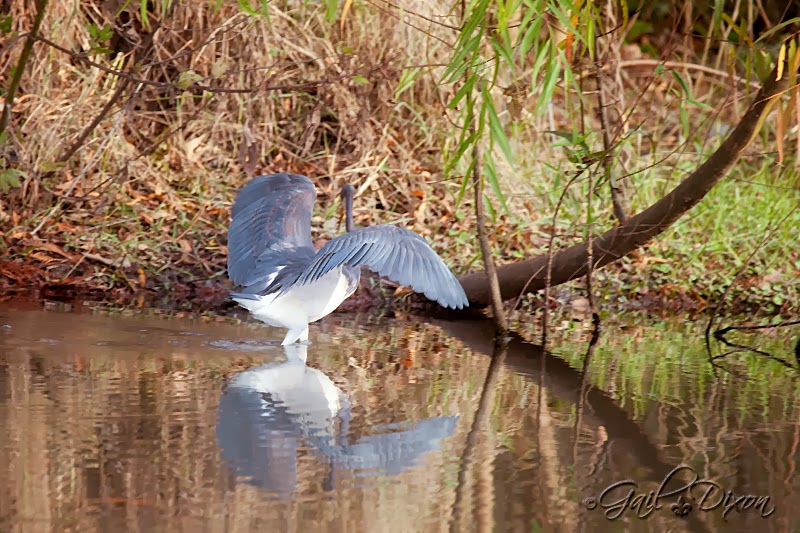 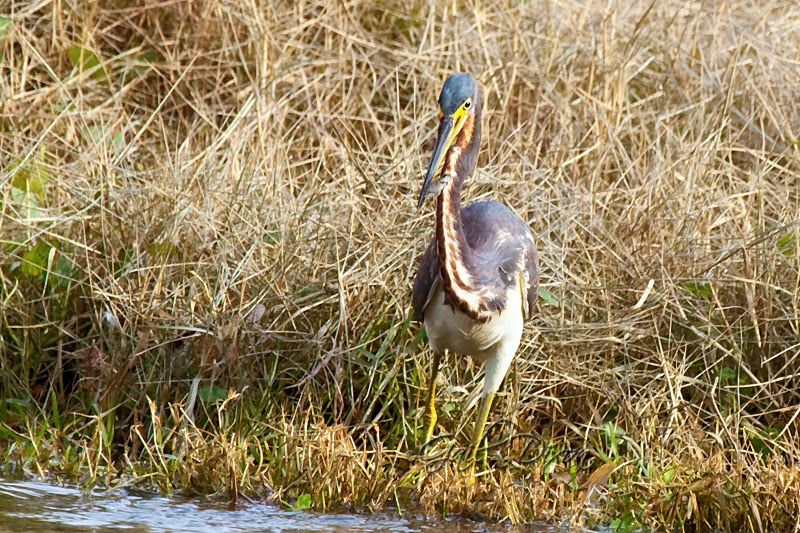 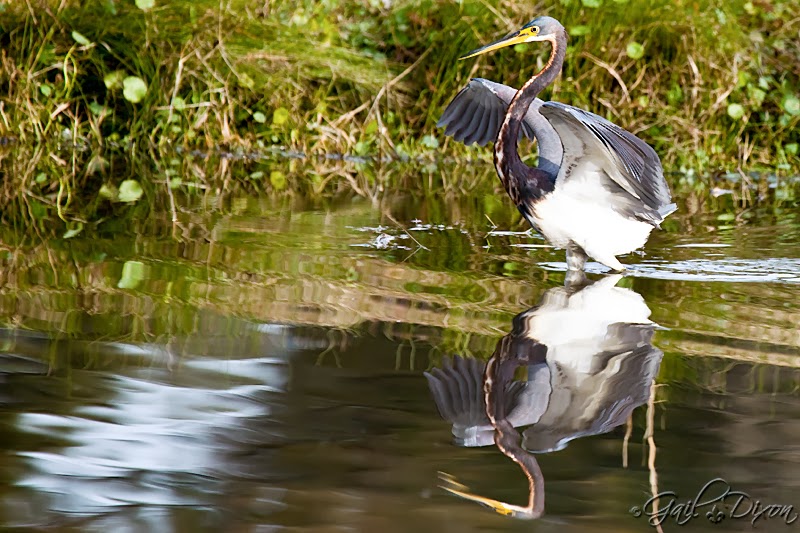 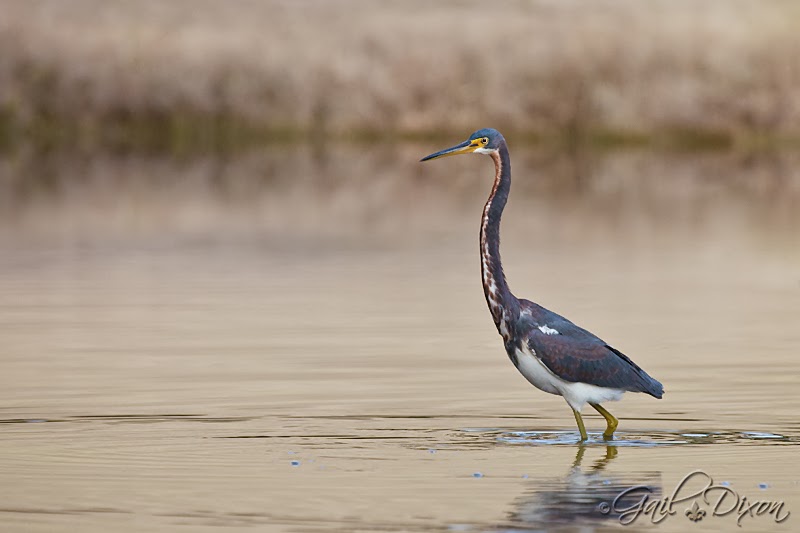 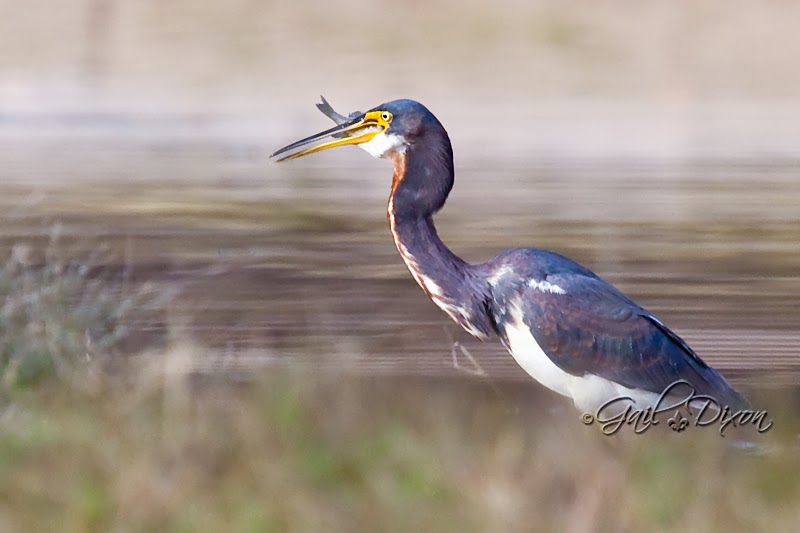 Out of 400+ I kept 73 images. There are eight on this post. I am determined that all of them will make it to my blog, so you might be seeing him well into 2014. Thank you in advance for your patience! :)

Linking with Anni at I'd Rather B Birdin'. Please check out the links if you have time.
Posted by Gail Dixon

awesome!! wow, so glad you got the opportunity to get this beauty. what great colors. ( :

You sound like me with so many photos! These are just wonderful shots. They are so clear and the heron is gorgeous!

Gail, lucky you. The Tri-colored heron is gorgeous. Your photos are awesome. I love the twirling and the beautiful reflections. I am glad you did not get hit with a golf ball. Have a happy day and week ahead!


Truly beautiful just!
I've never seen it. Heron itself I know that there are flying in the Netherlands, but I never them.
Beautiful series with beautiful colors and details and also with fish in its beak.
compliments

Pure art Gail! You captured the true spirit of this wonderful bird! Awesome!

He's a true beauty!! What a spectacular bird.

I didn't know there was such a heron. Which proves how little I do know. You are brave to trespass onto private property to get a shot ... er ... 400 shots.

Golfers, smolfers. Wonderful opportunity and I'm glad you took advantage of it. He is a beautiful creature! Looking forward to seeing him weekly (at least).

Oh no, the heron just cannot understand the sign.

It is not a golfer.

i'm all for it! SOOO envious!!! even if you did tromp all over golfers territory and have attitude about it, too. :)

i've heard about their dance - very cool! i LOVE the reflection shot - i think it is #6. wowza...

p.s. rainfield ALWAYS sees the other side of things. :)

me, again. just like i do whistler wednesdays, you might need to do tri-color tuesdays to use up your backlog o' pics. :)

Awesome captures Gail, I love them all. The herons reflection is extra spectacular.

I've only seen one heron spread its wings while stalking. I thought it might blocked the water reflection and helped them see the fish better.

Linda at To Behold The Beauty said...

This was definitely worth confronting some angry golfers. The shots are wonderful. I love the spread-wing and reflection pictures. Such a colorful bird, with such a long neck. And an unusual method of fishing. I think you're going to have to make another trip to the golf course for some video. :)

Great shots!! I love the one with the reflection of the heron in the water

...must mention that the water droplets is MY favorite.

Glad to know you enjoy the Birdin' meme for the weekend. Hope you share some more of these tri-colored.

How exciting! I'm afraid I might have been very bad too because capturing a tricolored heron with my lens would indeed be very, VERY special!

Lucky you and us! Glad you didn't get booted off the golf course. Maybe they were lobbing the balls to entice you to leave!

What a colorful heron! You are lucky those golfers were kind that day! I especially like the image of the heron isolated against the background and water.

A very handsome bird! I can't wait to see more photos of him.

Indeed he was a hoot and a marvelous find. Glad you were not hit in the head. Dianne

He's a beautiful bird. No wonder you snapped so many shots of him. Must.ve been fun to watch him fish!

Coloring Outside the Lines said...

He's a stunning creature. What a great find and series of captures. And yes, I would have done exactly the same. Silly golfers. ;)

Such amazing shots my friend. I Love the one with the reflection. But they are all fabulous. Can't wait to see more of them..

Gail, you sure are hilarious in this post. Thanks for your support of my inspirational messages (they are way faster to post than a photo shoot) instead of a photo shoot on Mondays for a while. Simple Sequins is trying to simplify my life rather than complicate it huh?
(hug) to you always.

Fantastic photos! Of course, we don't have these guys in this part of the country, but I've always liked the plumage of Tri-colored Herons even more than Great Blues. It's always nice when they aren't too skittish. Glad you didn't get knocked out! :-)

I am sure glad you didn't see that sign until later.These images are worth all the effort.

Jackpot, for sure! What a beauty. Thank you for risking your life to get these!!!

Oh what a delight he must have been. You certainly captured some great images. I will definitely look forward to seeing more in 2014!!

Great shots of this beautiful heron Gail. Those reflection pics are fantastic.

That was EXACTLY what we said the first time we saw one 'that bird isn't quite right in the head' I think were our actual words. And then went home to identify it and read ...(I never remember to take my guidebooks with me). Anyway, it was a fun way to learn and the info will certainly stay with me! Thanks for the pictures!!!

The shots are just beautiful dear Gail :) I love how the colors reflect in the water below. Such handsome birds :)