Last week I was contacted by Jim at Muddy Dog Coffee Co. in Morrisville, NC about using one of my photos for a coffee label. Did my post title fool you? :) Intrigued about which photo it might be, I called the number as soon as I got the email. Jim explained that a Google search had turned up my photo of a Tabasco barrel. He thought the picture would be great for a limited edition brand of coffee they had experimented with called Pepper Cask-Aged Sumatra Lintong. He couldn't pay me, but offered to send some coffee. Hey, the bartering system works for me! Besides, Double D LOVES coffee and I have reluctantly become a convert in recent years.

Today I received the special delivery just in time for my second cup. Tearing open the box, I was excited to see not one, but THREE bags of the special coffee sporting my photo on the labels! Of course, step 1 was to document my prize. 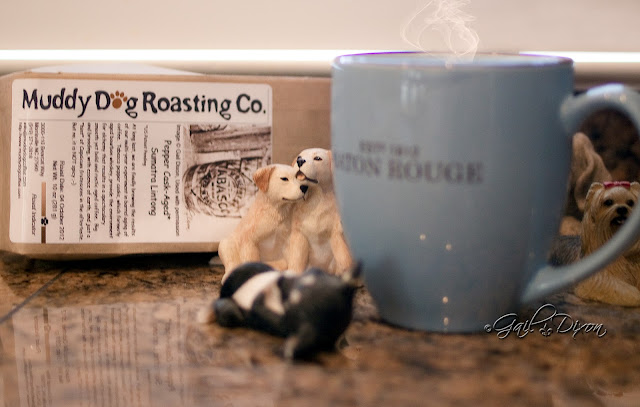 As soon as I finished the photography phase, my next step was to sample the coffee. It smelled very strong, so I was a little worried that it would taste bitter, but HOLY COFFEE BEANS! This stuff is smooth as silk with an exceptionally pleasing taste. This is huge for me because I drink coffee for the caffeine mostly, not for the taste. I was pleasantly surprised that I actually enjoyed this so much. Jim, you should make more!

Note: Jim did not ask me to do a review on his special coffee, but since everything turned out better than I expected, and he kept his end of the deal (plus some), I thought it would be a nice gesture. Jim, you made a fantastic batch of coffee! I thank you for sending three bags so that I can share. I also thank you for your honesty, for you could have just used the photo without telling me, and I'd probably have never known. Hope it's a big seller for you. :)
Posted by Gail Dixon

oh, this is awesome! you rock, gail! your photography does, too. so glad a company noticed it and asked to use it! and even better that you have mutual admiration going on! :)

You've been needing a pick up so I imagine God answered via Muddy Dog! I am so excited for you and your awesome image on a label w/dog as part of the name. What more could a Lousiana Belle ask for!

Loving everything about this post! You're famous and I know you ;>).. or feel like I do anyway. Your photo that Muddy Dog used deserves to be on the label and your photos documenting your gift are wonderful (love Chance inspecting it)....I love that the guy was so honest as to ask and send you the gift. The whole post just makes me smile!

I'd love to taste that Muddy Dog too! We are native Pacific Northwesterners and we run on coffee up here!

When I saw your title my first thought was Chance had gotten into something on your way home the other day. Big relief to see him all silky and shiny sniffing the coffee. Great photo op, Gail. Have a good week.

Yep..when I saw the title in my sidebar, I thought it was your dog (which I didn't know you had, anyway) in the mud. How exciting to see your work on a label!!! Fabulous!

Oh Congratulations I can see why someone would want them They look great.
You are so right anyone could steal the photos and use them I have seen a few of those in my time. Jim is a stand up guy I am sure of that.
Enjoy mmmm I can almost smell it. Congrats again. Yeah B

OMG....you are like famous now. you know that right ?
seriously, that is SO FRIGGIN cool that they wanted YOUR photograph !!

walk around and pat yourself on back....I MEAN IT !!
xo

Well, isn't this just about the coolest thing ever!! How wonderful that a company used your photo for a label...your buttons must be poppin right off, so proud. And what makes it even better is that the product is a winner too. Enjoy that smooth tasting coffee and after you empty a bag, frame it!!

Your title made me think that Chance had gotten in a mess.
congratulations on your photo being chosen to grace the package of coffee. That is truly a compliment and I think he got the better deal here.Three bags of coffee for using your photo? Glad it tasted good anyway.

Fabulous! What a good deal for both of you. Your photo-shopped photo is GREAT.

Can't get much better than that! Woo Hoo for you sweet Gail....Who knows what be next in your future...I told you gurl, that you were GOOD at all this photography stuff...

Free Coffee?? can't beat that either.
BTW...love the picture..
shug

Congratulations Gail!!
This is so truly well-deserved.
I just love the photograph, and it seems perfect for what they needed.
xo.

Linda at To Behold The Beauty said...

Wow! How neat, Gail! Now, you need to go out and roll Chance in some mud, then retake that photo of him sniffing the coffee. I'm sure your new friend, Jim, would want to use that photo on a future label. :)

Congratulations Gail! That image does make a great logo.

Congratulations Gail!!! That is so exciting and it IS a neat photo of the Tabasco Barrell!! Where did you take the photo? and how did they FIND your photo to use?
How wonderfully exciting for you!!
Enjoy :-}}

Glad you're enjoying the coffee, and thanks for the nice review. My wife says to tell you she loves the photo of Chance. Your art was perfect for this project. At the risk of shameless self-promotion, this coffee can be found at https://muddydogcoffee.com/397-pepper-cask-aged-sumatra-lintong

I love that photo and I'm not surprised he wanted to use it!! I think it is just the beginning... :)

Congratulations! That's awesome! I love coffee so that would have been a no brainer for me! Very cool!

That is a great lable photo...you did well..Sold for publication!

Now I know a famous photographer! I think it's great that Jim put your name so prominently on his label. Congratulations, friend. And to think you took this photo with a phone!

That's fantastic, congratulations! I can see why he wanted to use your photo!

Great story Gail and I can see why your picture would be good for any foody products. Next stop the world!

Congratulations! How cool. I love seeing your pic on the coffee label!

Good for you Gail! Wow I can smell it from here! Great photos!

Wow! Congratulations! That is a great honor. You are famous! And I know you. :)

Oh my gosh!!! God Bless Google ;)...how wonderful!!! I am so thrilled for you...what a great feeling it must be to make a pot of coffee with a bag of coffee that has your name/photo on it....what a high!! Congratulations. God certainly takes us where he wants us to go.

Well, how cool is this?! Congratulations, Gail! That is such a great photo.

CONGRATULATIONS! I always get so excited to see my blog friends expand using their photo abilities. Go Gail! I loved the pic when I saw it too.

WOW! Now that is awesome news! We are big coffee drinkers over here...so that is just music to my ears! And yes, it is nice that someone actually contacted you rather than infringe on your copyright. So excited for you...

Best I've ever done was get one of my photos on a siding company's blog. Yippee! No free siding though.

Congratulations, Gail. This is huge.

But I have to ask --- do you think the McIlhenny Company would have any copyright issues with Muddy Dog using their logo? (That's the ol' insurance investigator in me coming out.)

Congrats, Gail. It's nice when good things happen to good people, as in, both of you. Since we're in Virginia now, we go to NC fairly often. The next time I go, I'll look for his coffee. Hub loves the stuff.

I love me some strong coffee!

Well done! Its the sort of story that keeps us budding photographers going!

When I come over to watch the humming birds I drop in for coffee!

That is a lovely shot! Congrats.

How awesome is that! Congratulations & I hope it goes nationwide w/ your pic on the label! Very nice that he asked 1st & was honest about it. =)

I think I remember that post... I think I mentioned that I'd love to have that barrel for my nightstand! LoL! =)

That is completely cool!!! Congrats. That photograph is awesome. I don't blame them for wanting it.

and ...yes, I too do love the sky behind the trees on my photo. It looks like I altered it but like I said I only cropped out the people on the bottom. (They were small and walking and looked rather distracting compared to the trees.)

Your image looks really great on the coffee bag !!

yay! congratulations :) it's a great photo and a lovely label. I'm happy for you and glad you also enjoy your coffee. I love coffee but the caffeine leaves me super super anxious I get depressed. but I love its taste and I can always drink decaf ;) happy day sweetie. xxo

Wow, that's so great! Well done, and your photo's here are brilliant, the picture they chose looks really good on the pack, how exciting!

That was a happy story Gail. Certainly a good trade too. Glad the coffee was to your taste - Dave.

WhooHooo!! What an exciting turn of events to have your photo be the launch of a new product! Kudo's to Jim for asking to use the photo and for making a great product to go along with a great photo!

oh isn't that ring tremendous? I put that on in devotion to my Mom. She loved rings! I am glad you liked it. take care and see you on Monday.

Coloring Outside the Lines said...

That is so cool! And how nice that he asked and sent you coffee.

the photo looks fantastic on the bag!!
and the coffee sounds yummy
brava to you and Muddy Dog

Awesome...this makes me so happy. I'm not surprised one bit that they wanted to use your picture! I did a double take when I saw Moorisville. We're in Mooresville all the time, I had to look on the map to see where Moorisville is. Congrats again...your photos deserve recognition.