Texas finally received a break in the oppressive heat last weekend. By Monday, Labor Day, it was too beautiful to stay indoors, so Double D suggested we take the DART train to the Dallas Zoo. The frequent stops are kind of annoying and some of the folks looked sketchy, causing me to white-knuckle my camera bag, but other than that, it was a pleasant, leisurely way to travel.

As a nature lover, I do not really care for zoos, but I do understand and accept their place in our society. Being an amateur photographer, I do enjoy capturing part of God's creation that I will never see in my neck of the woods. Now you'd think that taking pictures of zoo animals is super easy, like catching fish in a barrel or something. Not! I think the biggest challenge was all the kids! The other one was wires, fencing, plexiglass, etc. Further adding to the difficulties were the animals themselves refusing to pose for me. The nerve!
I started out with the 55-250mm lens. Because of the crowds, I was unable to get the reach I needed, so when I finally gave in and decided to change to my 100-400mm lens, I got lots of stares as well as comments. People would move out of the way, parting like the Red Sea, when I came to an exhibit. I did feel rather important, and while I didn't exactly enjoy that feeling, I embraced it pretty quickly, using it to my advantage. I'm always chasing the elusive "perfect" photo, after all. Is there such a thing? I won't stop trying; I'll continue to try until I have arthritis in my fingers and can no longer press the shutter button. 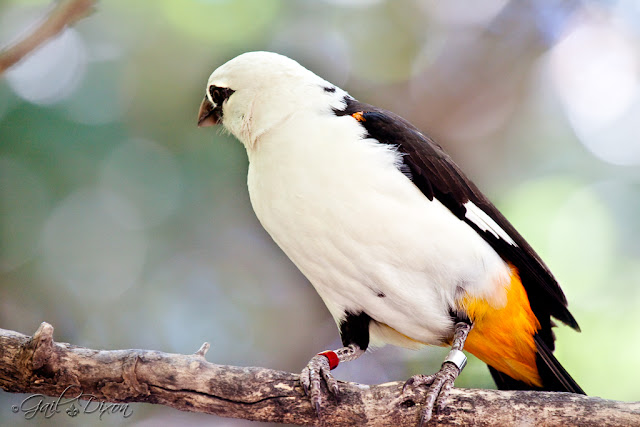 Side view
Hope everyone has a wonderful weekend! Today I am getting a set of Kenko extension tubes so I hope to have some interesting photos to share next week! Thanks, Lisa, for the advice!

Update on extension tubes: Amazon sent the wrong ones. The particular vendor they contracted with will only issue refunds.  I can reorder but since the box was incorrectly labeled I'm afraid the same thing will happen again, so I've put the tubes on hold for now. :(
Posted by Gail Dixon

FABULOUS pics and had to laugh thinking of you with your big lens and the masses parting as you made your way to the exhibit -- what'd your husband do?? LOL! Hope you have a good weekend.

these are great! loved the rhino shot with all his textures. :)

Time very well spent w/ your camera & lens at the zoo... you did really great! They're all so cool... absolutely wonderful series of critter shots

Your animal shots are so wonderful, Gail! What fabulous captures!

Glad you changed lenses, the details you captured are amazing, I felt like I could just reach out and pet every one of them! And I'm pretty jealous of those eyelashes on the Klipspringer, lol!!

Love the Klipsinger picture. Beautifully captured. All of these are wonderful :)

Wonderful captures! That tortoise is keeping an eye on you!

stunning shots!!! love these, all of them.

You certainly did get some great shots...more perfect than can be expected! I've never seen a klipspringer - so cute!

Fantastic images Gail!
I love the tortoise.
Have a fantastic weekend.

Awesome shots, Gail! I really LOVE that first one of the macaw...oh, the colors. I wish I had a big ole lens so I could feel like I was parting the red sea ;)

Great shots GAIL! I especially love the first one of the Macaw. How very gorgeous! Love them all!

A superb set of images Gail.
I love the sleeping Cougar, and the Golden Palm Weaver is a beauty.

These are so amazing.. And how fun.. I love to go to the zoo.. I can't even pick a favorite.. They are all such great shots..

HOpe you have a wonderful weekend..

Perfection is what I see! These are awesome Gail! You have a wonderful book in your portfolio.

My brother was in San Diego (from Georgia) recently and it was so hot not many of the zoo animals there presented themselves to the public! Glad these guys are acclimated to the heat.

I confess I love zoos for their educational value, but a part of me still feels sad about the animals being confined. These are great shots and that 100-400mm is moving up on my wish list again! What are Kenko extension tubes? Time to hit Google.

check out that site for the mouse over effect... & i just have to add that I LOVE THE COUGAR... I know I already said that, but had to add it again =)))

Wow - crowds parting to let you through! Lucky you! And what wonderful shots you managed to take. They are all marvels.

I just attempted this a few weeks ago. You did a STUNNING job - love the sleeping cougar - so sweet! I think the zoo might pay you for some of those photos -for real. They are so expressive with great composition. XOL

Gail, the crowd probably parted because they thought you were with National Geographic with that big lens.
I have never seen a Klipsinger! They are so cute. The photo of the sleeping lion i would canvas and hang above my mantle. So gorgeous!

I am like you...I hate to see animals penned up that should be in the wild. It is depressing to me no matter how they try to make it seem natural.

I had to laugh at your clutching your camera bag. I do that too...like a mother protecting her young. LOL

So amazing pictures, you wouldn't guess all the difficulties you did have with wires etc. Flamingos are so gorgeous, that pink is so soft. I wish I has a eye lashes like Klipspringer:) Chimpanzee are always my favorite, they are so human.

My first visit, will visit you again.Enjoyed the post, loved the read. Amazing pics!!Thanks for sharing! If you wish to follow back that would be great I'm at http://nelsonsouzza.blogspot.com
Have a lovely new week!

You took some great photos, Gale. I especially love the birds -- and the flamingo is wonderful.

Your photos are magazine worthy-

I wish I knew more about how to improve my photography.

I just stay on AV and hope!

Holy cow you got some good shots, all of them! I was at our zoo recently, and I agree not as easy as it looks to get some good, interesting shots. I love the one of the cougar.

WOW - a 400 mm zoom - how do you hold it still enough? I have trouble even with my 250. Do you use a tripod? I just hate carrying the tripod, so usually hold my breath and hope for the best. I love the napping cougar.

The color and bokeh around these birds is fantastic! I was going to ask for a 50mm for Christmas, but I have the same trouble you do in crowds when I'm at school functions with the kids. It is so hard to get a good shot, maybe I should reconsider.